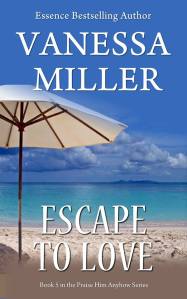 She wanted a peaceful escape to the Bahamas. What she got was love and danger at every turn.

Renee Thomas can’t trust herself to pick a good man. Putting her life back together after being in an abusive relationship, she finds a job. Her new job isn’t exciting, but it nets one major positive: she reconnects with an old flame, but like a moth to a flame, her abuser also tries to reconnect with disastrous results, not only for her, but everyone she loves.

Jay Morris can’t afford any distractions. He’s staking his entire career on an IPO that must go off without any glitches…but he can’t stop thinking about Renee and the fear he saw in her eyes. He’d give up everything in order to protect her… he’d walk through fire for the chance to love her. 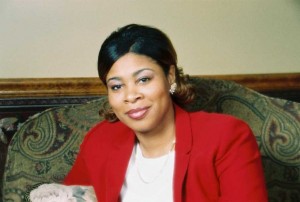 Vanessa Miller of Dayton, Ohio, is a best-selling author, playwright, and motivational speaker. Her stage productions include: Get You Some Business, Don’t Turn Your Back on God, and Can’t You Hear Them Crying. Vanessa is currently in the process of turning the novels in the Rain Series into stage productions.

Vanessa has been writing since she was a young child. When she wasn’t writing poetry, short stories, stage plays and novels, reading great books consumed her free time. However, it wasn’t until she committed her life to the Lord in 1994 that she realized all gifts and anointing come from God. She then set out to write redemption stories that glorify God.

To date, Vanessa has completed the Rain and Storm Series. She is currently working on the Forsaken series, Second Chance at Love series and a single title, Long Time Coming. Vanessa believes that each book will touch readers across the country in a special way. It is, after all, her God-given destiny to write and produce plays and novels that bring deliverance to God’s people. These books have received rave reviews, winning Best Christian Fiction Awards and topping numerous Bestseller’s lists.

Vanessa originally self-published, then in 2006 she signed a five-book deal with Urban Christian/Kensington. Her books can now be found in Wal-Mart, and almost all major bookstores, including African American bookstores and online bookstores such as Amazon.com.

Vanessa is a dedicated Christian and devoted mother. She graduated from Capital University with a degree in Organizational Communication. In 2007, Vanessa was ordained by her church as an exhorter. Vanessa believes this was the right position for her because God has called her to exhort readers and to help them rediscover their place with the Lord.

Most of Vanessa’s published novels depict characters that are lost and in need of redemption. The books have received countless favorable reviews. 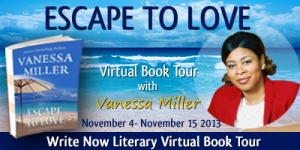 Looking herself over in the full length mirror, Renee Thomas liked what she saw. She’d often been compared to  Angela Bassett. When Renee first began hearing the comparison she felt compelled to remind people that Angela Bassett was in her fifties and old enough to be her mother. But then Renee realized just how ageless Angela Bassett seemed to be. She might be in her fifties, but the woman could pass for a thirty-something. So, whenever she heard the compliment these days, Renee simply smiled and accepted it.

Outer beauty had never been a problem for Renee. But her inner beauty that had taken a beaten because of her dealings with Marlin Jones. He had constantly made her feel as if she couldn’t do anything without him. The night he beat her and made her loose their child had caused her self-esteem to sink even lower.

Her father and step-mother had been praying for her and after months of doubting herself, Renee was finally ready to re-enter the workforce. Wearing a navy blue suit, she grabbed her purse and headed out of the house. She’d messed up her life by making so many wrong choices in the past, but this was a new day for her, a new beginning.

Carmella handed her a glass of orange juice and a bagel with vegetable cream cheese. “I figured you’d want something light to get you going.”

“You’re always so thoughtful.” Renee kissed Carmella’s cheek. “I haven’t always been as thoughtful where you’re concerned, but you’re good people. I still miss my mom. But I am so thankful that my father married you.”

“You’re always going to miss your mom, Renee. I still miss mine. But you were so young when you’re mom died… I just wish you could’ve had more time with her.”