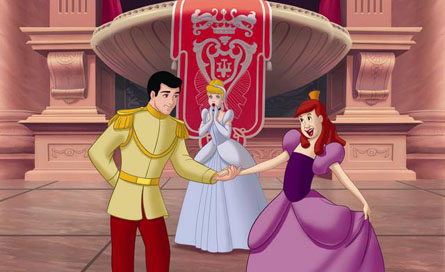 So those of you who have been with me for a while  know I have two adorable kids; a girl and a boy. I’m  thankful to God for the gift of motherhood. Not everyone was given the privilege so I do not take the gift for granted. My family is the center of my world.

Since my daughter is older; four, she is normally the one who chooses which channel they would watch. Well after service on Sunday we went out to eat, she kept bothering me about Cinderella;

“Mummy if we don’t hurry up , we going to miss Cinderbrella.” she whined( yeah you read it right, she calls her Cinderbrella)

“Baby but you have watched Cinderella so many times before, you even have the book  and you saw her  when we went to Disney, how much Cinderella do you want.” I teased

“Mummy no, they showing a new one.” she continued to whine while eating her mashed potatoes. I finally calmed her fears, telling her that  Disney doesn’t show their movies till 6 pm. We had enough time, this was just 2 pm.

Come 6 pm and I’m working in my office, here she come so excited “Mummy they have started, they have started.” so I rush out to watch with them. What do you know…it wasn’t the classic Cinderella, it was a part III called Cinderella A Twist in Time. I didn’t even know there was a part II talk then of a part III. So we began to watch as a family;except my husband of course. The movie  showcased the tale going backwards; the step mother found out Cinderella’s source of magic;fairy godmother. Stole the wand and turned the classic tale upside down. The Prince placed under a spell forgot Cinderella and was going to marry one of the step sisters. So the whole show is about Cinderella’s fight to claim what is rightfully hers.

At the end of the one hour thirty minute movie, two things kept stirring in my mind;

1. She knew that what was hers was hers

2. She also was willing to contend earnestly for it.

As Christians ( and I know I’m so guilty) we are so quick to recite he cliche “what God has for me is for me. But when the test comes how quickly we fall. It takes deep faith and trust in God to say that with your mouth and believe it with you heart. Whatever it is that God has for you, is for you BUT you have to contend for it. We cannot just believe that what has our name on it is ours and then just sit back and relax and expect it to be dropped at our feet. It doesn’t happen that way. Long gone are the days when God just dropped manner from the heavens, don’t get me wrong, HE is the same God today, yesterday and forever but He will also only meet us at our level of expectation and dedication.

In 2 Kings 13, Elisha was about to die but before he did he took King Jehoash to the window to TEACH him what he needed to do to defeat the enemy. He then asked him to do hit the arrows on the ground; read the excerpt below…..

15 Elisha said, “Get a bow and some arrows,” and he did so. 16 “Take the bow in your hands,” he said to the king of Israel. When he had taken it, Elisha put his hands on the king’s hands.

18 Then he said, “Take the arrows,” and the king took them. Elisha told him, “Strike the ground.” He struck it three times and stopped. 19 The man of God was angry with him and said, “You should have struck the ground five or six times; then you would have defeated Aram and completely destroyed it. But now you will defeat it only three times.”

Before I started writing, I used to dream everyday that I would be this best selling author, but I never picked up even a crayon to write one line. But I had all these dreams, I knew what I  was destined to be but after work everyday I would watch TV so long my eyes would hurt, I will then go to bed, work, church, back to TV, kids everything else but  put in the hard work it took to be a good writer, and author that book.

Cinderella had seen what was hers and was going to fight to get it…Sometimes though, it doesn’t always work like that, then that’s when our faith takes over. Trusting that He knows the plans for us………

Enugu, Nigeria…. That’s where we head to in Rent A Bae.
#TBT #BeninCity is the home of the Adolo sisters. During my visit to The Met in NYC last month, I got to view some artifacts that were taken from the ancient Benin Kingdom.
One thing about that maiden in SOS, she wasn’t weak or passive, yet she let him make the move.
When Bae dresses you for his movie premiere.
The rating and reviews are coming in for Rent A Bae.
For years, she settled for the mundane. The courage to love also gave her the courage to be all that God made her to be.